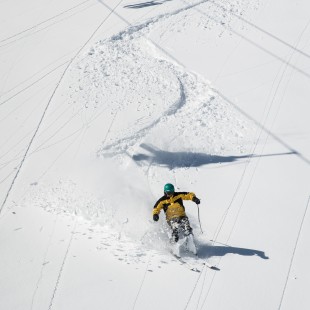 A genuine pioneer, the founder of Les Karellis Pierre Lainé built the resort taking into account the environment (natural and human), the economy (financial rewards for developing the area) and social challenges (for seasonal workers and the social diversity of resort holidaymakers).

*balanced development:
The result of work by economists J. Lebret and F. Perroux, the concept of balanced development was used to draw up construction and development plans in countries with a weak or fragile economy. Pierre Lainé embraced these principles and adapted them to community tourism.

Les Karellis resort in the French Alps in Savoie, at the heart of the the Maurienne Valley, is still today a unique concept in tourism development. Created in 1975, the original utopian resort still delights holidaymakers who enjoy the many advantages of the mountain, summer and winter...

Les Karellis... Where did the name come from?

A unique mountain resort was born on the slopes where the Karèle grew: Les Karellis!
But what is "Karèle"? Don't bother looking it up in the dictionary, the word isn't in there because it comes from the Montricher dialect!
On the mountain pastures of Montricher a long, smooth grass grows called "Karèle". It can be found on the sunnier slopes. The young herders used to slide down the slopes on this long grass.
They would sit on their coat or on a board and slide down the mountain like on a toboggan. The name of the resort came naturally. Les Karellis: a sweet combination of "Karèle" and the place known locally as "plan-Karelli".

"Once upon a time there was Les Karellis... "

Les Karellis was a godsend for the inhabitants of Montricher in the early 1960s. The school had just closed, the decline of farming in the area was worsening and the administrative centre was transferred to Le Bochet, further down in the valley.
The unique design of the resort's plans (presented by its founder Pierre Lainé) won over the town council who at the time were looking for investors to help develop winter tourism.

The result of cooperation between the town and the "Renouveau" charity, the project was made possible by careful management: